One of the biggest barriers to entry to creating video content is a lack of resources.  Time, money, people – there’s never enough of the things you need.  At least that seems to be the perception among a lot of the people we talk to.  The reality is that efficient content creation is a very attainable goal.

Old-school video production folks might advocate for a big budget to come in for a full day (or days) to create one big video.  Maybe this video would turn into a TV spot.  Maybe it would play at the start of a tradeshow.  Maybe it would be used as a training resource.  Maybe one of those things was all you needed to get out of this shoot.

The current landscape of video production and distribution has necessitated a change in the way marketers think about this process.  Every brand is (or should be) on social media, and in order to most effectively leverage your social channels, they need to be filled with rich media content.  That means that getting one video out of a shoot doesn’t cut it anymore.

Luckily, there are some simple ways that you can stretch your resources to feed your marketing machine with high quality content.

Make the Most of Your Time 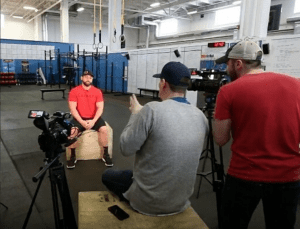 We’ve talked a lot in the past about making one shoot turn into many videos, and it’s a crucial component of efficient content creation.  Even if you go into a project with the goal of creating one “cornerstone” piece of content like a case study or feature video, that doesn’t mean that’s all you have to get out of a shoot.

The methodology at 5 Tool Productions is to maximize a filming session so that it’s more than a one-to-one relationship.  One shoot can get you a brilliant feature video.  But it can also create short-form content maximized for social channels that will feed your marketing machine for an entire month.  It may seem too good to be true, but it’s really just a matter of planning out your shoot appropriately, and having clear goals when you start rolling the camera.

Whether you’re working with a production company or in-house, start to think about the things that might normally end up on the cutting room floor.  Not everything is perfect for your final feature video or case study, but that doesn’t mean it has no value.  The thirty second clip that the video editor dreads having to leave out of the two minute piece could be a perfect clip to use on Instagram or Facebook.

There are great quotes, clips, and stills in every frame of your shoot.  Don’t waste them because you’re too focused on a single end product.

Mundane to You is Exciting to Your Audience

Your day to day may not seem like anything special to you.  But to your audience, the inner workings of your daily life are an insider’s glimpse into an unfamiliar world.

By lifting up the curtain and spending time documenting an average day in the life of you and your company, you accomplish a couple of key things.

First and foremost you’re saving time.  It might seem to you that a video shoot requires you to stop what you’re doing.  Some level of set-up is unavoidable, but by allowing a crew to tag along with you during an average day, you’re able to double-dip.  You can work while the things you’re doing are captured for posterity.

Second, this style of shooting brings out a level of authenticity that’s difficult to replicate in other styles.  At first it might feel odd to have a camera following you around.  Once the initial strangeness wears off, the magic starts to happen and your audience gets to see the real you.  A sit down interview is great, but in terms of digging deep it can’t compare to actually showcasing a day in your life.

Failing to Plan is Planning to Fail

One of the biggest mistakes people make going into a shoot is not thinking far enough ahead.  Before you ever start rolling the cameras, you need to be thinking about how this shoot, and the resulting content, is going to go to work for you in the short and long term. 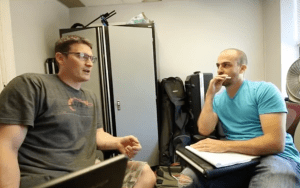 The 5TP team deep in the planning process.

There are tons of great resources out there to help you get started with building out a content marketing calendar.  This calendar can be a tremendously helpful guide as you go into a shoot.  Knowing the content you need for the next four weeks will allow you to grab them from your shoot more effectively.  It’s like a seeing-eye picture – you might not even know it’s there until you know what to look for.

As always, you should retain some level of flexibility in your calendar.  Let it be a guide, not a box that restrains your creativity.

The blessing and the curse of social media is the volume of content it demands.  It simultaneously puts a huge burden on marketers to constantly create more high quality content.  This is difficult to budget for, and stressful to keep up with.

On the flip side, it’s an opportunity to constantly be trying and testing new things.  Next time you set up a video shoot, commit yourself to getting at least two pieces of content out if instead of one.  See what works and build from there.

Efficient content creation isn’t a pipe dream.  If you need some help getting started, drop us a note today.  We’d love to share some ideas with you! 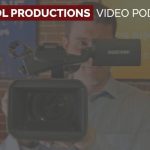 Getting More Out of Your Video ContentVideo Production 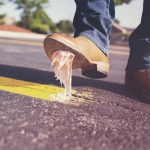