It’s been an interesting year for Facebook.  To kick off 2018, they announced sweeping changes to the infamous algorithm that shook brand publishers’ strategies.  They were hit with a large scale scandal the likes of which most companies wouldn’t survive, and were actually forced to apologize for it.  Organic reach continued to plummet on the way to hitting new lows.  Most recently, they experienced their first period of flat user growth since 2011.   As we turn the corner toward the final quarter of 2018, we see the potential for the biggest shake-up of all; a pivot toward Facebook becoming a private social network.

The idea of a private social network may seem like a misnomer, but in reality it’s already a huge part of Facebook’s business.  Private social networks are also a big part of the social ecosystem when it comes to messaging apps, groups, and private sharing within apps like Instagram.  And some people saw this trend coming.

Even before the chaos of 2018, there was a fair amount of speculation that this year would bring a push toward more privacy online.  One of our favorite marketing analysts, Mark Schaefer, talked about it a bit in his marketing trends round-up at the start of the year.  Mark wrote about the ways the social interaction is migrating to more of a private setting, and why that’s important.  In that article, Mark wrote, “think about this: The biggest un-tapped trove of consumer data in history — private text messaging — is moving onto Messenger and WhatsApp and into the hands of Facebook. That is a WOW.”

What Mark talked about was a global trend toward users pushing for more private interactions.  Things like chatbots would become front and center in this scenario, as would more personalized marketing.  But some recent shifts in Facebook’s marketing strategy show that they’re going in the direction of a private social network as well.

The Shift to a Private Social Network

So what does a shift to a private social network look like for Facebook?  There are three main elements to it, and they’re all already integrated into Facebook’s tool belt.  These tools are messenger, events, and groups.

Messenger is a critical component of Facebook’s long-term growth plans.  Adweek wrote a recent article calling marketing via messenger apps the “next frontier” of business growth.  Messenger already boasts well over 1 billion active users, and it represents an area that consumers generally feel is private in nature.  Recently Facebook has made advertising via Messenger a priority, including serving autoplay video ads to some users via the platform.

It’s natural that a pivot to a private social network would start with Messenger for Facebook.  It’s a potential gold mine for marketers, with the chance to interact directly with potential customers.  For Facebook, it’s another channel through which they can serve ads, which they desperately need as the news feed becomes more and more crowded. 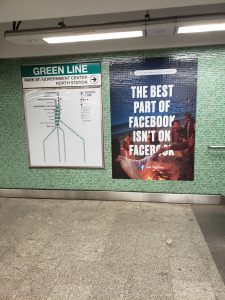 If you’ve been outside in a major metropolitan area recently, chances are you’ve seen this slogan.  Facebook has launched a major ad campaign promoting the use of events.  If you’re a Facebook user, you probably know that most events are private, or at least semi-private.  This massive campaign is another sign that Facebook is shifting its focus toward a private social network mindset.

This campaign is something of an admission that users prefer the features of Facebook that connect them only with their actual friends.  Not that kid from middle school who pops up in their news feed all the time.  Not their aunt from the other side of the country who’s always ranting about politics.  Not their high school gym teacher.  Their real, actual friends.  Despite all of Facebook’s flaws, there’s still tremendous value in connecting people seamlessly online, and Facebook events do a great job of that.

Will we begin to see ads served within private events?  Only time will tell, but never put anything past the Zuck.

Perhaps the most obvious sign that Facebook was headed toward becoming a more private social network came in the form of their algorithm shift back in January.  Here are the words directly from Facebook’s head of news feed in January:

With this update, we will also prioritize posts that spark conversations and meaningful interactions between people. To do this, we will predict which posts you might want to interact with your friends about, and show these posts higher in feed. These are posts that inspire back-and-forth discussion in the comments and posts that you might want to share and react to – whether that’s a post from a friend seeking advice, a friend asking for recommendations for a trip, or a news article or video prompting lots of discussion.

Upon review, doesn’t that read as a way to make your news feed more private?  Facebook wants to show you things that come from people you care about – in addition to ads, of course.  The news feed may be the most “public” part of Facebook, but with the algorithm shift, even that’s becoming more of a private social network.

What Does This Mean for Marketers?

We’ve talked at length about Facebook ads, as well as the algorithm shift, on this blog.  One of the big takeaways from Facebook’s shift to a private social network that we haven’t covered as much is the increased use of Groups.  Facebook groups are a great way to bypass the newsfeed altogether and get direct communication with your most valued fans.  The problem comes in that you have to start from scratch in building an audience in groups.  Still, the effort could be worth it once the dedicated followers are in place.

Outside of that, we’ll continue to preach the value of consistent, high-quality content in your newsfeed.  The public element of Facebook won’t disappear any time soon, even with an increased focus on person to person interactions.  The big change is that you need to be hyper-focused not just on content that’s valuable to your audience, but on content that they want to share with their family and friends.

When you’re ready to start churning out that content on a regular basis, let us know; we’re ready to help you turn into a content factory and feed the beast that is Facebook! 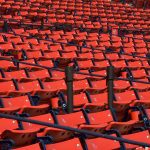 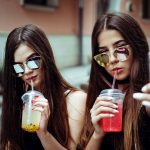