From Distribution to Creation – The Evolution of Vimeo

When Vimeo launched in 2004, the internet was a much different place.  Facebook was only for college students, YouTube didn’t exist yet, Twitter was still two years away, and the iPhone was still just a thought in Steve Jobs’ head.  People connected to the internet via their computers, and their connection speeds were nowhere near what they are today.  So it’s natural that the mission of Vimeo has changed a little bit over the years.

Vimeo has always existed alongside other user-generated video hubs like YouTube, but it’s never quite hit the mainstream in terms of users.  Quality was always paramount for Vimeo, focusing on being a platform through which users could deliver beautiful work to the world.  In fact, Vimeo was the first site to allow users to upload videos in 1280X720.

As the tools to create and upload HD video have spilled into the hands of the masses, Vimeo remains a place where great work can go to live and be seen.  But more importantly, Vimeo has evolved to become a place for creators to get help making awesome things.  Their newest addition of a high-quality stock video library is the latest in a string of recent moves that illustrate Vimeo’s primary focus: the creator.

The service sources high-quality footage from Vimeo creators, and aims not to have the largest library of stock footage, but the best one for its users.

Creative professionals, marketers, brands, agencies and businesses of all sizes will enjoy disruptive economics as compared to other stock marketplaces: Vimeo Stock contributors keep 60-70 percent of revenue generated from their licensed clips (versus the average industry cut of ~35 percent), while subscribers to Vimeo’s paid membership plans always save 20 percent on all stock purchases.

Our latest podcast is all about the evolution of Vimeo, and what it means for the online video ecosystem as a whole.  Enjoy!

The Evolution of Vimeo – Full Transcript:

Tyler Pyburn: Hey there everyone, Tyler Pyburn here with Phil DiMartino. We’re from 5 Tool Productions. Thank you so much for tuning into another edition of the Video Podcast. Now, today’s podcast, we always talk about, trending topics and things going on in the industry. We don’t really go too much with news things. But what we’re going to talk about today is news as well as what’s going on in the industry, kind of a swing in that. Specifically, about Vimeo and how the platform itself is changing a little bit right now.

Phil DiMartino: Yeah, and I think the way that we’re talking about it, and the way that we’ll eventually come to frame it today, as we talk about what changing is. Vimeo is undergoing a shift to help be more of a creation engine as opposed to a distribution engine. Which is interesting because when it first launched and what made it what it was, was this platform for filmmakers and creatives. Not necessarily the everyday quick hit. People with more high quality stuff.

Tyler Pyburn: That was the other platform. It obviously didn’t have the popularity that YouTube did. But the owners, the CEO of Vimeo is now recognizing that we’re not going to be the destination where people go to go watch and consume content. We’re not going to be able to keep up with the Joneses, so to speak. Not just with YouTube, but the Netflixes of the world, the Amazons of the world that are investing so much in original content, that they just said, “We’re not going to go that route. We’re going to go a different route and try to, like you said, help with the creation. With the tools process.” So, what are some of the things they’re doing?

Tyler Pyburn: All these other different, hundreds of platforms that are out there.

Phil DiMartino: As of this year, Vimeo now has its whole live streaming platform built into it. So, if you’re a premium member, you can access these features, and you can go live, and then use an encoder to stream an HD stream through Vimeo, which is a totally new thing. They also introduced a lot more review tools. They have this whole review portal, so it’s a lot more of, from our perspective, it’s a great tool because-

Tyler Pyburn: It’s something that we can collaborate with clients on.

Tyler Pyburn: We’ll send the client a link that they can review on. And for them, it’s much easier than before it was always, let me write an email with the time code and what’s going on. They’ll forget to write the time code and they’ll go back. Whereas now, it’s they can literally comment right on the screen itself. Tap where, I don’t like this person’s hair at this moment in time. And they go, “We’ve literally had that happen to us.”

Phil DiMartino: There are services that actually charge a fair amount of money just for that one piece and there’s maybe a little more built out. But Vimeo is basically been able to provide that for production companies, and people have a lot of review and back and forth to be able to collaborate there. And then the latest one when you talk about news that came out recently that they announced-

Tyler Pyburn: Within the past couple of days really.

Phil DiMartino: Was Adobe has their own version of it too.

Tyler Pyburn: But there’s stock footage, stock footage imagery and things like that, that there are basically saying, “Here, we want to help you create.” Again, going back to that method of, helping with the creation not the distribution. Who knows, maybe they will help you with the distribution but not necessarily to get it seen on their platform. Like I said, Vimeo was a creation tool, as opposed to Vimeo as a destination website.

Phil DiMartino: It’s really interesting, you mentioned Netflix and Amazon and Hulu, and everyone is in the basically the TV game now. I think there was a point where Vimeo talked about whether or not they wanted to try to entice creators to come and do that so that people would flock to Vimeo to either pay or watch for free with advertisers.

Tyler Pyburn: They were at one point in time that, I was just a regular user. External for some of that was a creator would go on to Vimeo and pay for a premium subscription. Not necessarily for the tools that we use now, but for the tools to go ahead and watch and access different video … I’m almost positive we downloaded a video just to see how someone used a specific camera. The camera we’re shooting on right now, we paid $49 to watch a long tutorial. It was a multi-part series.

Tyler Pyburn: So, that was available. Now, who knows if that’s how that’s going to change and be affected? But that’s where they were going, that premium content model as well.

Phil DiMartino: Yeah, and it’s not just that either, it’s also companies like Facebook and by proxy Instagram and Twitter and all these other companies investing a lot of money in allowing people, regular people not necessarily creators looking to make money, although they’re there as well. But regular people to upload and get their content seen in YouTube, to get their content seen on those networks. There’s just so much competition there. But for a high-

Tyler Pyburn: It’s still a roll of the dice.

Phil DiMartino: It is.

Tyler Pyburn: While we know that, the content is king, all that crap, but the fact is that you’re still rolling the dice because you don’t know for sure people are going to watch some of these different thing, and that’s going to bring in the money.

Tyler Pyburn: We don’t know that for sure. We’re not 100% sure on that. So, you’re still investing a ton. We’re talking billions of dollars.

Tyler Pyburn: Not a small company that says, “Yeah, we’re going to see, and we’re going to spend a couple of thousand dollars on a show.” No, they’re rolling out series that cost millions of dollars. So, it’s a different play on a different level. And they’re seeing and saying, “There’s so many people spending so much money right now, do I want to be in the mix of all that? Or do I say, we can shift our focus a little bit more and be profitable, be solid and just be a different company altogether.” It’s kind of cool.

Tyler Pyburn: Well, think about the things right there that we talked about earlier. The review tools-

Phil DiMartino: We use it constantly.

Tyler Pyburn: We use it constantly. The ability for our folks to download, and an external person be able to download a video-

Tyler Pyburn: At multiple different aspect ratios so that they can have something small that they can host on their intranet. That’s a massive tool for us. And then the Livestream portion of it. We’ve used it twice now, as a backup event, just to see. And it’s only a matter of time before we use it as a primary stream. So, it’s, we’ve used a lot of the tools for it. We haven’t dipped into the stock portion of it, but it’s only a matter of time before we do. I know that.

Phil DiMartino: Right, exactly. I think for people like us, it’s a big benefit. I think that there’s obviously going to be people like the really pure filmmakers who went to Vimeo at the beginning because it was like a place for artists and it was more like a little lax in terms of copyright and things like that.

Tyler Pyburn: You really liked the player. It looked a lot cleaner and you can customize your player versus YouTube’s players-

Phil DiMartino: It was a nice way to show off your really high quality work. Absolutely. And it still is. But that’s not necessarily the primary focus. I think some of those people might be pushed away, but I think they’re focusing more on people like us, frankly, which-

Phil DiMartino: Thank you. So, it’s interesting changes, it’s great. But I’m curious to see what else comes of it. You look at these companies and we talk a lot about Facebook and all the new features they add. And all of these companies are always trying to be either the first to a new feature or the best of a feature. Vimeo seems to be taking the best approach. They weren’t the first to introduce live streaming, but they acquired a company that was great at it, and now they’ve [crosstalk 00:07:45] stock footage. You look at it, it’s not just a random collection of junk. When you go through the Vimeo stock footage, it’s really high quality video.

Tyler Pyburn: It’s highly shot. A lot of it, some of it you’re even seeing some 8K footage on that, which is impressive.

Phil DiMartino: It might not be first, but they’re trying to be best. And that’s great. I love to see companies do that.

Tyler Pyburn: Very cool indeed. All right, so we’re talking about news a little bit, but also helps creators as well. He’s Phil., I’m Tyler, thanks so much for tuning in. 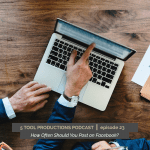 Measuring the Effectiveness of PodcastsPodcasts