Everyone has had the conversation with their friends in one way or another.  “I talked about X Product, and later that day it showed up in my news feed.  Is Facebook listening to my conversations?!”

The best conspiracy theories are the ones that are hardest to disprove.  This one is no different.  These instances of creepy coincidence do seem to happen to everyone.  How on earth can we explain it away without giving serious credence to the most obvious theory?

I listened to an episode of Reply All on this topic recently (we’ll get to their conclusion in a second), and the belief in this theory runs really, really deep.  The conversation comes up on reddit, podcasts like Reply All, seemingly impossible to explain YouTube videos, and blogs constantly.  There are hundreds, probably thousands, of people who truly believe that this is happening.

So, back to the direct question; Is Facebook listening to its users?  The direct answer is “Yes – if you broaden your definition of the word ‘listening.'”  The trick is that they don’t need access your microphone to do it.

A Mountain of Data

That means data about location, or demographics, or past behaviors, or shopping, or browsing history, or connections, or a myriad of other things.  Everything you do online leaves a digital footprint.  That footprint helps Facebook, and the 6 million advertisers trying to sell to you there, know just about everything about you.

Facebook doesn’t need to listen to you to know about you.  They (combined with their advertisers) already know just about everything there is to know.

*gets one semi targeted ad relevant to their life*

"HOLY HELL! O MY! FACEBOOK IS SPYING ON ME, WHERE THE HELL IS MY PRIVACY. THIS IS A NATIONAL TRAVESTY. CALL THE FBI"

A reasonable, if slightly exaggerated take, on targeted advertising

But there’s another side to the conversation about data when it comes to this conspiracy theory.  The best write-up on this topic that I’ve read comes from Wired, where Antonio Garcia Martinez breaks this topic down in tremendous detail.  As Martinez details, the amount of storage space it would take to spy on you is beyond even what Facebook has access to.  As detailed in Wired, “Facebook’s entire data storage is ‘only’ about 300 petabytes, with a daily ingestion rate of about 600 terabytes. Put another way, constant audio surveillance would produce about 33 times more data daily than Facebook currently consumes.”

Martinez was also the guest on Reply All’s episode on this topic, where he talked about this in more detail.  Martinez, who helped build Ad Targeting at Facebook, talks a lot about the role of location data and how it helps Facebook know more about you.  He also helped develop Facebook Pixel, which basically follows you everywhere you go on the internet and explains every action you take back to them.

Beyond that, Facebook has bought data from companies that help them know more about you and what you do offline.  Reply All goes into this in way more detail, but in essence Facebook helps to create an aggregate of attributes that breaks down who you are as a person.  Some of it is real, some predictive, but it’s all part of the puzzle in informing Facebook about who you are and what you might want to buy.

You can see the ad categories that you fall into in your settings. You can find these on your own profile under Facebook Settings –> Ads –> Your Information –> Your Categories.  Mine are below: 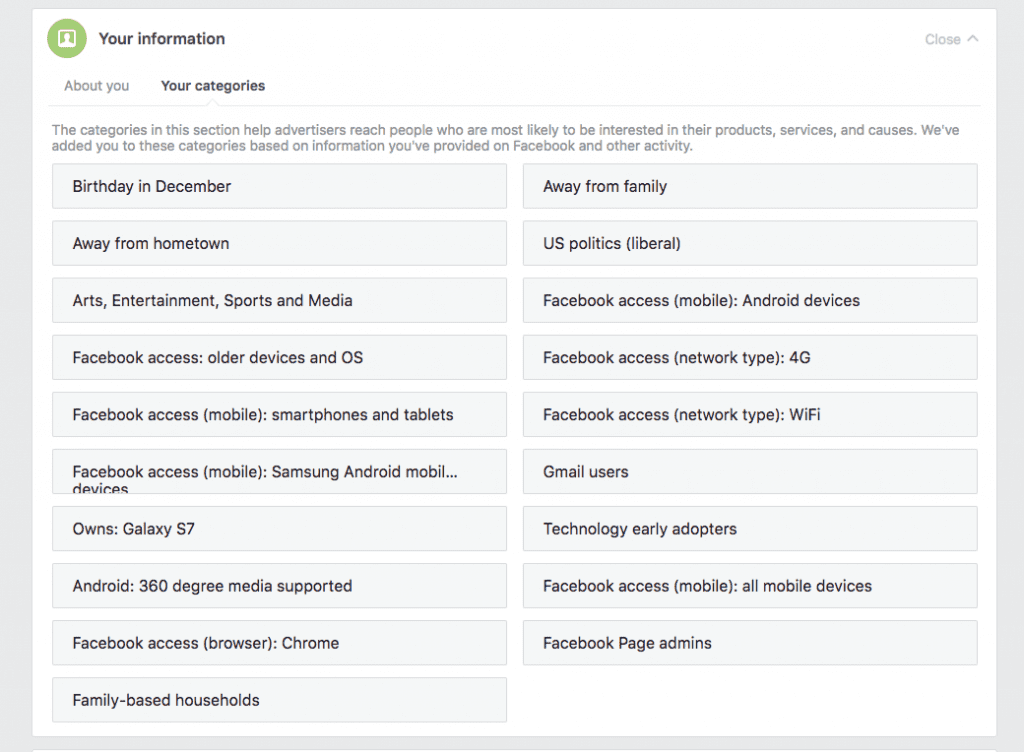 None of this individually is earth-shattering information, but in aggregate it paints a picture of who I am. Combined with the data I give them willingly, as well as the data collected by all of the Pixels implanted in sites I visit every day, that picture becomes even more clear. Once it’s fully drawn, this picture helps some of the most advanced algorithms around understand me, and decide what I might want to buy.

It’s All About Timing

OK, so Facebook knows a lot about you.  But how did it know to serve me an ad of that very specific thing I like immediately after I had a conversation about it?  This one is easy; it’s all about perception.

The Telegraph dives in to this idea a bit more, explaining that this is most likely a mental trick.  The reality is that you probably already had been served the ad for that very specific thing before you noticed it.  In fact, you’d probably been served that ad multiple times.  You just hadn’t noticed it because it wasn’t top of mind.

“There’s a name for this: the Baader-Meinhof phenomenon, also known as the frequency illusion, and it’s a concept that existed long before Facebook existed,” says James Titcomb in the Telegraph. “If you’ve ever noticed that you learn a new word or cultural reference, only to then see it used constantly, it’s the same feeling. It’s a form of cognitive bias – our tendency to assign more importance to things than they deserve.”

But what about the times users are served ads that are seemingly irrelevant to their interests?  Like the video we linked to above:

In reference to the specific video above, Titcomb writes, “Even if you don’t feel that you’ve given Facebook enough data to target an advert about cat food without it eavesdropping on you, its algorithms may well be sophisticated enough, based on a number of data points, to suggest that you might be the kind of person thinking about getting a cat. ”

One of the main pieces of evidence that believers in this theory will cite is that Facebook has a setting in permissions granting access to your microphone.  This is true!  But Facebook has an explanation for this too.

In a post published in June, 2016, Facebook’s statement denies using your microphone to influence ads or news feeds in any way.  It goes on to say, “We only access your microphone if you have given our app permission and if you are actively using a specific feature that requires audio. This might include recording a video or using an optional feature we introduced two years ago to include music or other audio in your status updates.”

Facebook popped up again to publicly deny any wiretapping when Reply All tackled this issue.

I run ads product at Facebook. We don't – and have never – used your microphone for ads. Just not true.

A strong, public denial from Facebook might not be enough to convince the cat food guy, but it’s also not nothing.  Of course despite this denial, the Twitter thread (and the phone lines) was full of people with stories too specific to be explained away.

Where Do We Go From Here?

There’s an important takeaway here for me, and it’s not in any way exclusive to Facebook.  Facebook is a corporation designed to make a lot of money.  As is true with most social media, you are the product that helps Facebook make money.  Social media as an industry has commoditized people as data and figured out how to sell it.

This sounds bleak, but it’s not all bad.  There are a ton of positives to living in a fully connected world tied together by apps like Facebook.  One of the negatives is that you’re giving away pieces of your privacy in return.

If you don’t think it’s worth it, there are ways out!  The team at Reply All put together a handy list of things to do to avoid being tracked by Facebook. 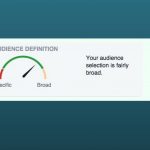 How to boost a post on FacebookSocial Media Marketing 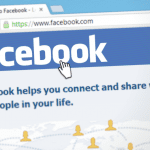 How to find out what Facebook knows about youSocial Media Marketing