The much-discussed and often feared Facebook algorithm is a huge topic of discussion for us at 5 Tool Productions.  More, it’s a critical component in the day-to-day lives of marketers all over the world.  The algorithm is responsible for the decline of organic reach on Facebook, and the stress that faces social media marketers about reaching their audience on the world’s biggest platform. 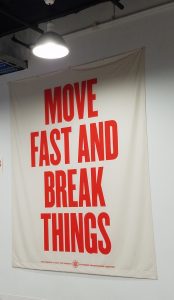 The craziest part?  None of us really know how the Facebook algorithm actually works.  That being said, we do have an idea of at least what goes into it, thanks in large part to articles like this one that Slate published a few years back.

As Will Oremus wrote in that article, “Humans decide what data goes into it, what it can do with that data, and what they want to come out the other end. When the algorithm errs, humans are to blame. When it evolves, it’s because a bunch of humans read a bunch of spreadsheets, held a bunch of meetings, ran a bunch of tests, and decided to make it better. And if it does keep getting better? That’ll be because another group of humans keeps telling them about all the ways it’s falling short: us.”

The More the Facebook Algorithm Changes, the More it Stays the Same

No matter what changes come to the Facebook algorithm, it’s critically important to keep this point in mind.  Human beings – your followers, your customers, and you – drive the algorithm.  And while the latest changes to the feed make it more difficult for you to easily get in front of your fans, you can still impact what your audience sees.

Facebook’s shift to becoming a private social network is just the latest piece of the puzzle for the company as it relates to becoming more “human,” a concern that goes way back to the Slate piece on the Facebook algorithm.  The latest updates to the feed were heavily focused on meaningful personal interactions.

All of this puts the onus on you to work harder to create more more quality content in a way that’s relevant to your audience.  The tactics that companies like Facebook use to determine relevancy will come and go, but no matter what you’re still in control of what you  create.

Create more content that your audience wants to see, and create it as efficiently as possible.  Distribute it in the ways that the big players want it distributed at that time.  Tell your loyal fans and followers about it by whatever means of outreach you have.  Keep it simple, and even the most dramatic changes to the Facebook algorithm can’t break your content marketing strategy.