The way we consume news has changed a lot over the years.  It used to be that you’d have to read a newspaper, turn on a radio, or tune into the nightly news to know what was going on in the world around you.  There was such a thing as a news cycle.  Those days are long gone. 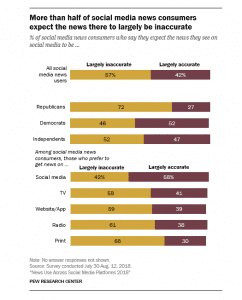 Social media has become the primary way that the average person gets their news.  But even if that’s the delivery system, most people don’t trust social media to bring them accurate news.

A new study shows that while 68% of U.S. adults get their news via social media, only 42% of people trust social media to bring them accurate news.  There’s a significant split among political leanings as well, clearly influenced by the current climate.

Despite Facebook’s recent controversies in the realm of data privacy and information sharing, it remains a primary source of news for most Americans.  From Pew Research’s report:

If People Don’t Trust Social Media, Can They Still Trust You?

This news is relevant for all marketers.  Even if you’re not running a brand page for a news organization, your content is still living in the same ecosystem.  If people don’t trust social media to deliver accurate news, how can they trust social media for anything?

Studies like this one should make you dig deep and think back to the early days of social media marketing.  In the beginning, these platforms were about people connecting with people.  When brands were eventually included, it started as a way to connect with fans.  Over time, these platforms have morphed to become the primary publishing tool for most brands.

Your presence on Facebook (and any other social media network that you want to publish on) should be about building relationships and providing value.  Good content marketing plans should provide a solid foundation for this.

The whole point of a content marketing program is to give your fans, clients, and prospects information and content that they want.   If you can do this effectively and consistently, you won’t have to worry about trust.  Just as importantly, your sales process will come easier.

Transparency on social media is key, now more than ever.  Provide value, create high-quality content at scale, and build relationships.  The results will follow!