Should You Be Worried About Facebook Exaggerating Video Viewing Time?

If you’re a marketer, you’re no stranger to Facebook ads.  The new reality for businesses on Facebook has become pay-to-play, and the favored medium for many has become video.  That’s why the news that Facebook has been overestimating the average amount of time that viewers watch video ads is so disconcerting for so many people.

According to the Wall Street Journal, “Ad buying agency Publicis Media was told by Facebook that the earlier counting method likely overestimated average time spent watching videos by between 60% and 80%…”  The miscalculation reportedly came from the fact that Facebook wasn’t factoring in people who watched videos for three seconds or less; the people who would skew this view metric downward the heaviest.

But what does this mean for the average marketer?  Is it time to blow up your strategy for paid Facebook content?

The simple, obvious answer is no.

While your average view duration on ads may have been skewed, and that’s disappointing, it doesn’t change the fact that Facebook ads are still one the best, if not the single best, way to reach a massive audience with minimal effort and reasonable cost.  As of June 2016, there were 1.71 Billion monthly active users on Facebook.  Add to that the fact that The Zuck is a firm believer in the power of video to carry his platform, and you can rest assured that this error is as big a deal to Facebook as it is to the average advertiser.

In terms of cost and billing, Lara O’Reilly of Business Insider reminds us that this metric shouldn’t have impacted the amount that you spent with Facebook.  “Facebook doesn’t charge for video ads that were viewed for less than three seconds, unless advertisers actively choose to be charged on this basis. You can’t bid on ‘average view time.'”  In their apology, Facebook also reaffirmed that this mistake had no impact on billing.

That being said, average view duration is an important indicator of whether or not your video grabbed the attention of your audience.  It’s especially critical on a platform that has such a low threshold for what counts as a view overall (3 seconds).  So if you’ve based your content creation strategy on your past results on Facebook, it’s probably worth revisiting based on this news.

It’s easy to get caught up in the insane amount of data that social media platforms spit out at you when you create content.  No matter what metrics you use to evaluate your video content, it’s important to remember that no single stat should drive your entire strategy, especially a stat from a network that wants and needs your ad dollars.

Your best bet is to take any metrics provided to you directly from a social network with a grain of salt.  Developing and distributing great content as part of an overall strategy is critical to generating leads and building trust.  Just remember that real engagement directly with your customers is more important than any single statistic. 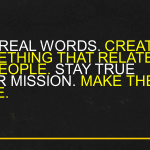