When Facebook rolled out its own native video platform back in 2014, plenty of people scoffed at the idea of the social media giant having the ability to challenge YouTube. Now it seems as if every possible social media platform has some of native video player. Twitter, Instagram, LinkedIn have all made the move and have seen some impressive numbers. As Phil pointed out in a previous post however, IGTV has struggled to find its footing since it has launched.

While many of these platforms made massive headlines when they rolled out their newest feature, just last year Reddit quietly rolled out its own native video platform of course by announcing it in a subreddit, r/changelog. Now, a little more than a year later, the self proclaimed front page of the internet has surpassed one billion video views per month. But the views aren’t the only things that are up. The amount of monthly uploads are up about 31% year over year hitting 996,000 uploads in August.

Keeping everything in house

When Reddit rolled out the new initiative, it came on the heels of $200 million in new funding and a $1.8B valuation. One of the reasons for the valuation, you guessed it, the idea of being able to serve ads via video to its users. While they haven’t used any in stream ads, it has also helped increase the amount of money coming in as revenue has tripled over the course of the last three years.  In fact, brands like Netflix, Nintendo and Audio are in the works on video ad campaigns.

Video has proven to have staying power on the site as well. Reddit users who watched videos during the second quarter spent twice as much time on the platform than those who didn’t.

Reddit still has a ways to go if they want to try to catch up to the other platforms but that doesn’t seem to be a worry for them. They are also noticing that video has brought in new users as well. Around 45% of the people who have uploaded a video had previously never had a conversation on Reddit before.

Why creators should care

If you’ve ever been on Reddit before, you know you can’t ust start posting your work left and right. You have to become apart of the community and eventually be accepted by its users. However once you are, the power of “the mob” can work wonders for growing your audience and having your content seen. Professionally-produced content from media companies and online video creators is not something the company is actively exploring there are undoubtedly plans to explore longer-form video, which is something that professional creators excel at.

The Pivot to (Better) VideoVideo Production 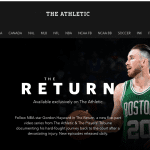