We had the chance to get down to New York for the NAB Show, East Version, this year.  There were tons of great brands there, and no shortage of video production toys to play with, but hands-down the biggest presence at the show belonged to BlackMagic.  They were front and center at the main entrance, and they had a huge selection of gear to test out.

While the star of the BlackMagic booth was probably their 4K Pocket Cinema Camera, the piece of equipment that caught our eyes was the ATEM Television Studio 4K.  We spend a lot of time working at live events, and we’ve emphasized the importance of using a live switcher in your video production before.  Whether you’re live streaming or not, a switcher is a great way to make your event more efficient.  And this one is really impressive.

The size and the price of this unit are the first things that jump out at you.  Once you get past the shock of how small the unit is despite having as many inputs as it does, you can move on to just how much is actually packed into this small form-factor.  BlackMagic has packed a lot of punch into this unit.

Beyond what’s built-in, there are also tons of options to add-on additional components to build out a full studio.  Even with those added into your shopping cart, the price is still very reasonable for what you’re getting.

In our latest edition of Create Smarter, we went hands-on With the BlackMagic ATEM Television Studio to give you a quick look at what this thing is capable of.

Here at NAB New York, one of the biggest vendors here is BlackMagic. We are very interested in BlackMagic. We use a lot of their supplies. One of the things we have not used yet is their ATEM Television Studio. This is the 4K version, so we’ve learned a lot about it here today, and we’re trying to figure out exactly how it works and how it fits into workflow, but it’s really cool, really affordable, a really affordable box.

It’s basically a switcher and a control panel all built into one. You’ve got your audio controls. You’ve got your downstream keys. You’ve got everything kind of built into this really compact box, and one of the things we’re talking about that’s a really interesting advantage to it is the price, so when you talk about some of these really high end switchers, you’re talking 20, 30, 40, more thousand dollars. This 4K switcher is coming in at three grand. It’s got all the components built in. It’s got tons of other elements built in.

The other part of is there are little boxes basically that allow you to load in your media just via files, be it an MOV file or a PNG file which you can use as lower thirds and video playback, and actually bring those in as camera inputs that are treated just like camera inputs here, so you bring those in, and super easy and simple playback so that you gain that element that you get with some of the software solutions while still being on mainly a hardware-based solution, so something we’re super interested in. It’s been really cool to play with here at NAB, so I’m really glad we had the chance to do that. 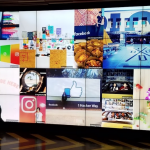 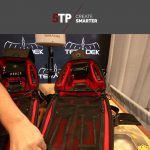