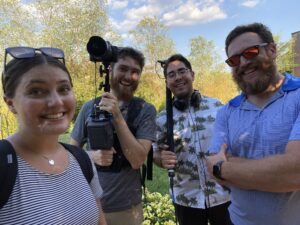 This year, we had the opportunity to work with the New England Botanic Garden at Tower Hill to create videos for their “Grow the Garden” Giving Week campaign. This project was a great example of how we experimented with new concepts & equipment and captured multiple pieces of content out of one shoot.

As part of their Giving Week campaign, New England Botanic Garden wanted us to create multiple pieces of content. The first being a Garden Tour video. They wanted to highlight 3 of their gardens within one video: the Garden Within Reach, the Vegetable Garden and The Ramble, by showing off broll of each and interviewing 3 employees. The second half of this project was the actual launch video that would kick start their Giving Week campaign and get people excited about giving to the garden. While the Garden Tour video was more straightforward, the Launch video presented an opportunity to get more creative!

Last year’s Giving Week fundraising campaign was all about what the garden meant to people. We had the chance to shoot tons of beauty shots, and this year we wanted it to feel a little different. That’s when we decided to pitch a point of view concept that we had been wanting to try out based on a family vacation video we had seen. Once the client agreed to the concept, we had to figure out how exactly to accomplish it! 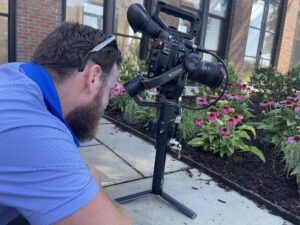 Both parts of this shoot presented new challenges when it came to equipment, so we had to test some stuff out!

For the Garden Tour, we wanted something that would elevate the content. We rented a gimbal for our C200 camera to allow some smoother motion while shooting broll. It also came up with a handy stand that we used to capture unique cutaway shots during the interviews. 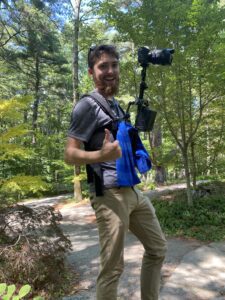 As for the Launch/Thank You videos, we had a POV rig that we were dying to try out. Before we went on site, we had to do some testing. We already had an idea of the shots we wanted to capture, so we decided to do a test shoot in our office.

Connor put on the rig and walked through our office interacting with people and objects along the way. We knew we wanted to have a shot where someone handed Connor food, so we had Marisa hand him food across a table in our kitchen. We knew we wanted someone to get Connor’s attention and have Connor quickly turn to see who was speaking, so we had David call for Connor and test out what that shot would look like with a whip pan. This was a great way for the team to see what worked and what didn’t. Now that we knew how the equipment worked, we needed to move on to the specifics of the shoot itself.

To start planning for the launch video, we needed to determine what places in the garden to showcase. Our team has been on site at the garden quite a few times, and there were still parts of it we hadn’t seen yet! We pulled up their website, looked at some maps, and noted specific locations and features to highlight that we added to a shotlist.

From there, we began to storyboard. We had locations, now we just needed to figure out what was going to occur at each one. What would the audience see and hear? The video would be pretty boring if Connor just walked from place to place looking at each of these landmarks. So, in our storyboard, we included actions at each location like interacting with a garden employee, walking down a pathway, smelling a flower, etc.

Arguably the most difficult part of this shoot was the scheduling. There was a LOT of ground to cover, but we didn’t need to spend too long at each location. A shot of Connor smelling a flower wasn’t going to take 30 minutes, but we needed to leave ourselves enough time to get to each location. We also needed to consider the physical locations of each garden and when it made sense to shoot at each location.

The other fun part of planning was the weather! Although we didn’t have to worry about it raining on our parade, we did have to worry about us (and our equipment) overheating. It was a sunny 95 degree day so we knew we would also have to build in some breaks throughout the day. 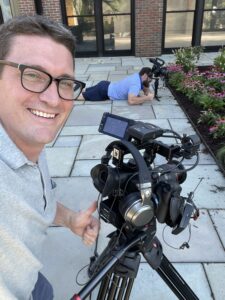 On the day of the shoot, we split into two teams. Team 1, Tyler & Kyle, handled the Garden Tour portion of the shoot. Team 2, Marisa, Connor & David, were tasked with shooting the POV material for the Launch and Thank You videos. And when team 1 was finished, they came to help out with the remaining shots at the end of the day for team 2. 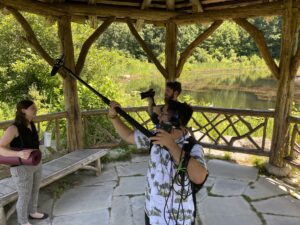 Team 1 shot 3 interviews throughout the day and captured broll at each garden to supplement what the interviewees had talked about.

Team 2 shot from morning until night! We made our way through each garden until we ended the day at the Beer Garden where there was food, drinks, lawn games and live music.

All in all it was a great shoot day, nobody passed out from heat exhaustion and our camera only overheated once!

This project was a great example of how our team can maximize shoot days by creating many pieces of content out of our one day at the garden. The 3 interviews were combined into one Garden Tour video, and the POV material was turned into one launch video to kick off Giving Week and a thank you video to wrap up the fundraising campaign.

We also created our own content from this shoot day! Check out our behind the scenes video.

And check out some other fundraising content we’ve created recently!